We’ve established our main online presence on this blog, powered by autistici.org, because we’d rather use self-managed tools and stay away from commercial start-ups or corporations whenever possible. Using online services comes with a number of systemic issues. For the same reasons we’re currently not on Youtube, or any commercial video platform, and stream on live.autistici.org.

Since we started playing with visuals, we’ve been uploading all our recordings to the Internet Archive, a free, non-commercial, library-style platform. We’ve just uploaded there our 100th video recording!

Also, during 2020 we joined and started participating in Scanlines.xyz, a self-managed online community for DIY audio/video projects. Among other things, Scanlines.xyz hosts an instance of PeerTube, a free and decentralized alternative to video platforms. We’ve been uploading there short clips created with an analog video synthesizer. Here’s an example: 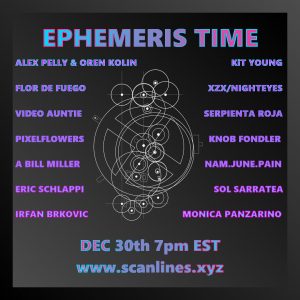 On December 30, we’ll be part of Ephemeris Time, a collective audio/video show that will be streamed at scanlines.xyz.

scanlines.xyz is a friendly community / forum to discuss DIY video and audio projects, electronic-based art, and related interests. It’s relatively young; we joined them in June 2020. We like it because of its hands-on attitude, knowledge sharing and mutual encouragement.

For Ephemeris Time we recorded and submitted a 20′ video. We feel it’s representative of our current style, and it also reflects some things that have been going on around us. We dedicate it to all the people who fought for their rights and for social justice in 2020.

For this set, we created an audio mix with music we like, using tracks by Sinister Sveta, Stephanie Merchak, Y/6543/, Madman’s Pannychis, Abul Mogard, Acid Kunt and Speak Onion. We recorded our visuals live with no post-processing, except the upscaling from the native 576p to 720p.

Our video and the videos made by the other 13 participants will be screened for the first time during the show.

Here’s a trippy trailer created by Andrei Jay, who’s been organizing the show:

In the usual Interzone and Daddies On Acid weekly shows, our live visuals take the whole screen; on November 27, together with djs Bergen and Hansi, we did something a bit different. While recording their set, Bergen and Hansi also recorded themselves on video in front of a green background. Then they shared the video with us, and we used the traditional chroma key technique to replace the background with our visuals, while keeping the DJs visible. This is a well known technique, but it was a first for us, so it was a chance for us to learn more about video workflows and about the tools we use.

As a reference, this is our current usual setup. 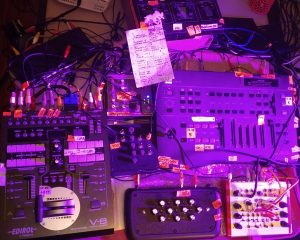 Some of the fun we have making live visuals comes from experimenting with always new ways of moving pixels and colors around our machines, eyes and screens. We often change how our equipment is connected and try different signal paths. Here’s an update compared to last week, in which we try to overcome some limitations. We’ll likely try this new setup next Wednesday. END_OF_DOCUMENT_TOKEN_TO_BE_REPLACED

Our VJing equipment and setup

This is the gear we’re currently using to make live visuals:

As a setup example, here’s how we connected the equipment and routed our video signal on Wednesday 11 November 2020:

END_OF_DOCUMENT_TOKEN_TO_BE_REPLACED

eon.20 is a project to gather a community of artists, “a hybrid space” where “a wide range of disciplines meet and dialogue in a safe space, without limits or censorship, giving voice and visibility to a wide diversity of artists and creators from the internet to the world”. We were invited by eon.20 to VJ on Anna Bolena‘s and Daddies on Acid‘s sets during the series of streams they organized to celebrate the anniversary of the Stonewall Riots, on the 28 June. If you missed them, you can still celebrate the Stonewall riots with us – here are the recordings.

In June, we also continued VJing for Daddies on Acid and Interzone. If you missed our sets, here they are 🙂

24 June 2020, DJ set by HC Cavallo and Simona Beat for Daddies on Acid

24 June 2020, ambient selection by Pixi for Daddies on Acid

This week, with Black Lives Matter protests shaking the U.S. and the rest of the world, we streamed our visuals for Daddies on Acid, adding some clips from BLM protests in the States and elsewhere, as well as from the protests that erupted in Chile some months ago, and from the great Fuck the Fascism project. We would normally not use riot scenes for our VJing at parties, to avoid inducing disturbing altered states of consciousness in dancers, but given this new normal home setting, our visuals are turning more and more into a video-zine, and we are having a great time preparing our sets.

Enjoy the videos, with DJ sets by Homecompiuter and MICHEL IPOGONDRY 🙂

And if you like these, stay tuned and don’t miss the future events!

With these sets, a new toy has been added to our setup – it’s the AVE MOD V2 by Syntonie, which distorts in even more interesting ways our video signals.

It is known that sometimes misery and distress bring a lot of creativity and inspiration, and this hasn’t been different for us: in the past few weeks we have been collaborating with several projects, doing visuals for our beloved Interzone, Daddies on Acid, and Dis/Tanz.

The Dis/Tanz video, with Ludi Oktokreuz & Schatten Voraus behind the console, will be streamed on Friday 29 May on several platforms by the Gothic Pogo Festival – check the Facebook event to find the links.

And here’s a taste of our recent VJing for Daddies on Acid and Interzone, with DJ sets by Hugo Sanchez (FRONT DE CADEAUX), MICHEL IPOGONDRY and Pixi.

For these sets, we added to our usual setup – Resolume Avenue + Vidiot + AVE5 mixer + BPMC Premium Cable – looping effects with a webcam pointed at a Sony Trinitron CRT TV, and used OBS Studio for streaming, recording, and scene switching. And as it happens, we found a way of recording our sets with OBS Studio and can say that these are our first fully recorded sets. Enjoy!

Pixelflowers is a duo – our names are Flo Heiden and Pixi.

You can get in touch with both of us by writing to:

You can also find us on Facebook, Instagram, and the Internet Archive, where you’ll find our recordings.

If you VJ and share a DIY attitude, consider joining the Scanlines community.

Give us good music and a beamer; we’ll give you a night of psychedelic, perverted live visuals.

In our work we employ abstract graphics, independent queer video productions, cinematography and lettering. We play with different technologies like software, analog video synthesis, cameras and old digital hardware. We like to work together with other artists, rather than competing with them.